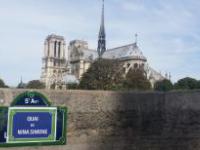 In visual protest of the fact that only 2.6 percent of the streets in Paris, the capital of France, are named after notable women, French feminist group Osez le FÃ©minisme pulled off a covert stunt that left almost all of the street signs on the ÃŽle de la CitÃ© with new names yesterday morning. Overnight, they managed to cover around 60 real street signs on the historic island in the Seine with new ones boasting the names of women who made â€œincredible contributionsâ€ to Franceâ€™s history.

Aurelia, a spokeswoman for the organization, explained the motivation behind their guerrilla marketing campaign, which coincides with the 45th anniversary of the womenâ€™s liberation movement, to The Local. â€œLittle kids walking around Paris will subconsciously be taking in the history of France through things like street signs. Theyâ€™ll think that France was built by great men â€“ but itâ€™s important they know about the important women too.â€ In addition to increasing the overall visibility of influential women, Osez le FÃ©minisme wants to see prevalence given to women who are famous for their contributions to society, rather than their relationship to men. â€œWhile there are plenty of men honoured on street signs, just 160 women, mostly wives or daughters of famous men, are given prominence in Paris,â€ the group noted. â€œBut our history is bursting with female scientists, writers, activists, politicians, artists and Resistance fighters which deserve recognition in our country.â€ Within Osez le FÃ©minismeâ€™s newly created â€œFÃ©micitÃ©â€ on the ÃŽle de la CitÃ©, the women gracing their â€œrenamedâ€ streets include the likes of pioneering lawyer Jeanne Chauvin, record-holding sailor Florence Arthaud, and Franceâ€™s first qualified female doctor Madeleine BrÃ¨s. Others include foreign female figures such as the American scientist and cytogeneticist Barbara McClintock, who was awarded the 1983 Nobel Prize in Physiology or Medicine, and American jazz great Nina Simone. One thing the organization has made very clear is that they are not looking for the streets currently named after men to be changed to womenâ€™s names. Rather, they want to see changes made to the 32% of streets in Paris that contain proper nouns, like Rue de la Chappelle, for example.

In the end, Osez le FÃ©minisme is hoping that their street sign cover-up, which has confused tourists and has received mixed reviews from locals, will be taken seriously by Parisâ€™s Mayor Anne Hildago, so they can meet with her to discuss a â€œconcrete action planâ€ that would also address the lack of female figures represented in the cityâ€™s public transport network. â€œThereâ€™s just one metro station named after a woman, Louise Michel. But thatâ€™s not even in central Paris â€“ itâ€™s in Levallois,â€ another group spokeswoman pointed out.

So #valuingwomen is not just a problem when it comes to U.S. paper currency or NYCâ€™s Central Park. This Parisian campaign calls attention to another glaring example of the global epidemic of a lack of visibility, in public places and on national symbols, of great women who have made and continue to make invaluable contributions to society and the world at large.