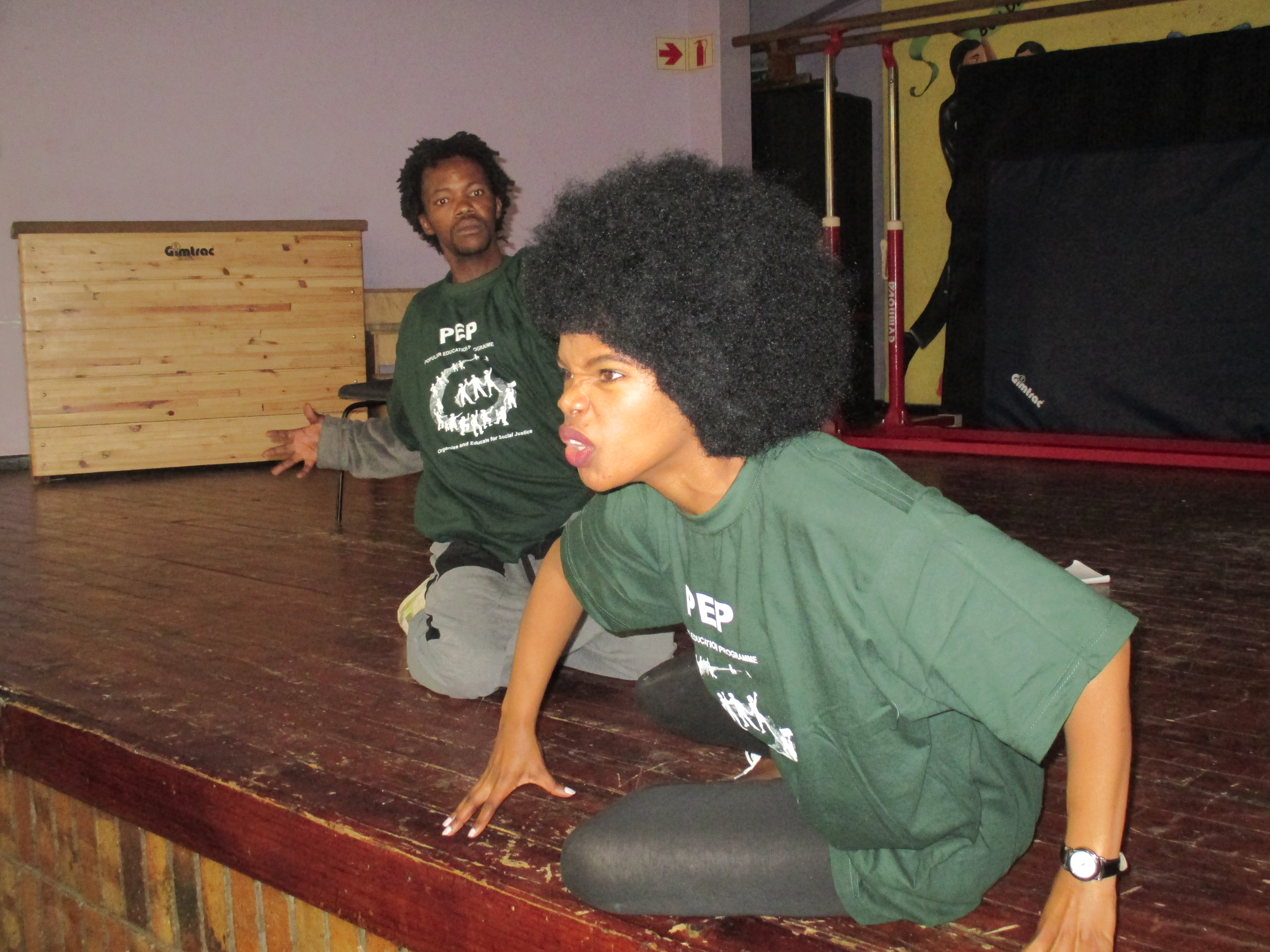 In the first phase of the â€˜Traditions of Popular Educationâ€™ project we had invited the Jana Natya Manch street theatre group from Delhi, India, to tour various communities and sites in/around Cape Town, and to run a workshop in street-theatre making for interested parties. It became clear that there is a great potential for street theatre performances to attract attention, to conscientise and activate a broad public.  A specific pedagogical undertaking of the second phase of the â€˜traditions projectâ€™ is to explore arts-based practices following the model of the community-based street-theatre experiences of 2014 and early 2015.

The Street Theatre Project (STP) 2015 has a dual purpose:

Experience has shown that performances in public spaces and places reach audiences that would not otherwise engage in and with popular education. The same audiences may not have had much exposure to drama and theatre and the joy of public story-telling! Street theatre can be a useful and engaging way to raise critical awareness of and build insight into issues affecting working class people with the aim to stimulate public dialogue and action for change.

The STP has now been launched and auditions resulted in a group of 14 dynamic and imaginative people who are committed to use theatre to educate a broad range of audiences around urgent issues affecting working class communities. From late October 2015 the STP group will visit communities and public events and perform short entertaining stories that inform, raise debate and hopefully activate people.

The STP decided to begin work around issues of health as these affect us all. The first play of the STP therefore focuses on Tuberculosis. This is killer disease No 2 in South Africa â€“ and it affects primarily people who struggle to make a living under poor and often unsanitary conditions. TB is air-borne and thus transmitted through coughs and sneezes, speaking and singing. It particularly hits people who are immunity-compromised (by being HIV positive, who suffer from diabetes, and who are malnourished) and TB thrives in crowded and poor living conditions.

Each performance of the play will be followed by dialogue with the audience around crucial ways of responding both personally and strategically. The engagement around critical issues should result in a commitment to clearly defined actions.

If we want to embark on a major street-theatre campaign we need to better understand why and how it works (or not). The second purpose of the STP is therefore research. We ask questions such as

-       What conditions need to be created and met so that performances in public spaces and places reach audiences that would not otherwise engage in and with popular education?

-       What specific features of public performance elicit strong responses, that is, how should performances be structured so that audiences respond in a way that leads to actions?

The STP group has had an exciting start: members of the group want to be both  educators and performers and their determination to make a difference is strong.  As STP members learn more and more about TB and its devastating impact on communities, the commitment to educating the public towards action grows. So far, questions explored include â€˜why is there such a stigma around TB?â€™ â€˜Who benefits?â€™ â€˜How can we portray TB so that the stigma is recognized as harmful to us all?â€™ The plays message will be strong: we all have to work together if we want to eradicate the scourge â€“ let us also learn from countries like Brazil who have successfully addressed and significantly reduced TB infection.