Exploring and tackling racism: A compilation of popular education activities 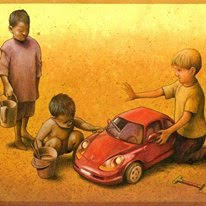 In his novel, Astonishing the Gods (1995), Ben Okri described the effects of racism as â€˜invisibility: the main protagonist is introduced as having been born invisible. His mother, too, was invisible, â€˜That was why she could see him.â€™ What may appear as magical is, in fact, rooted in very tangible evidence:

â€˜It was in books that he first learnt of his invisibility. He searched for himself and his people in all the history books he read and discovered to his youthful astonishment that he didn't exist. This troubled him so much that he resolved, as soon as he was old enough to leave his land and find the people who did exist, to see what they looked like (p.3).â€™

He travelled for seven years, and his quest was 'for the secret of visibility'.

Currently students who demand radical changes in curricula have picked up on this: how come, they ask, we (Black, often working class) and our reality is not to be found in textbooks?

But the experience of invisibility goes much further, of course. Colonised peoples, and black people, in particular, experience themselves as expendable: as labour they are easily replaced since there is a surplus of unemployed hungry people, as agents of history they have been obliterated, as creators of cultures and ways of knowing they have been eliminated, as inventors of technologies suited and adapted to particular habitats and producers of knowledge they have been omitted and deleted. Their values and worldviews have been denigrated, excluded or destroyed to a point where we think of western ways as not only the only legitimate ways, but in fact the only existing ones.

Racism is being articulated loudly and clearly in South Africa today.  Recently, we have witnessed the activism of young girls speaking out against racist school policies. Racism is a learnt attitude and behaviour in South African society that is part of all our everyday experiences. It should not be left to our school students to fight alone. In order to address it, we must begin by recognising it, understanding it in its material, historical, cultural and social manifestations, and then unlearn it and act against it.

Here, we feature some popular education resources on the issue of racism: how to understand it and how to act against it. Our search unearthed surprisingly few local examples â€“ demonstrating how little conscious and targeted unlearning work has happened. Therefore, we have included materials from other places â€“ some, adapted to our conditions, some left so that you can fashion them according to your context and needs.

In general, education work around race/class/gender is tough. These are issues that pervade our everyday situations, interactions and the very workshops we hold to address them. Thus, while it is useful to share ideas, workshop activities cannot be transported uncritically in time, instead they should be aligned carefully with your educational and political purposes.

Activities and workshops on understanding racism

1.     Terminology:  A set of key definitions, relevant to anti-racism work, has been compiled by the Anti-racism Resource Centre in Canada: Racism 101.

2.     The well-known and often adapted activity entitled â€˜the privilege walkâ€™. You may want to just test your own privilege (or not) and then adapt the activity to a group you work with.

3.     Resources for anti-racist analysis: The catalyst project seeks to build multi-racial movements for collective liberation. The project â€œ...mentors white people to take collective action to end racism, war and empire, and to support efforts to build power in working-class communities of colourâ€. The project, based in San Francisco, US, has put together a number of resources  towards 'deepening anti-racist analysis'.

4.     Resource for working as allies: AWEA, based in Auckland, New Zealand supports adult and community education programs. See their resource on working as allies and the importance of addressing power imbalances of the ally position. The website also has many activities directed at exploring justice.

6.     Workshop Guide: Training for transformation is both an organisation and pedagogy. Started by Anne Hope and Sally Timmel (see live interview here) in Kenya in 1973, it has established centres in various countries including South Africa. See their chapter on racism in Volume 4 of the â€˜Training for Transformationâ€™ handbook, published in 1999. The chapter traces the concept of racism to its historical roots - as a function of violent colonialism where 'white' people subordinate 'black' people. It also explains how our daily experiences in the present are influenced by ideas of racism. The chapter includes reflective group exercises on power and privilege, perceptions, identity, discrimination, institutional racism.

7.     Workshop guide:  The Centre for Adult and Continuing Education (CACE) published A guide to workshops on Challenging Racism by Antoinette Zanda (1993).  All education work is deeply contextualised. This workshop material was developed in 1993 and should be adapted to suit current conditions and dynamics.

1.      White Privilege: Unpacking the Invisible Knapsack. This article explains privilege simply and powerfully. It is useful for â€˜whiteâ€™ people to read and think about with respect to their position.

2.      For extensive free literature on race, class, gender and sexuality see this website.

1.      The Wits Centre for Diversity Studies holds public courses around the concept of 'critical diversity literacy'. This is considered 'a way of perceiving and responding to the social climate and prevalent structures of oppression'. Follow the link for more information and publications.

2.      Anti-Racism Network of South Africa (ARNSA) was launched in November 2015. With the aim of dignity, equality and freedom for all, ARNSA, 'coordinates and strengthens the efforts of NGOs, NPOs, CBOs, faith based organisations, sports bodies, educational institutions, government institutions, labour unions foundations, business entities and individuals. The network sees this coordinating function as vital in an attempt to end racism in South Africa.