Home Current Issues Here's how much it costs to feed a family of four around the world, mapped by Louis Dore

Here's how much it costs to feed a family of four around the world, mapped by Louis Dore 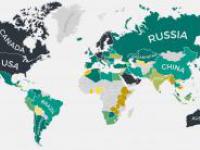 The countries whose families have the most eye-watering food bills have been revealed.

The research by MoveHub shows that Uganda is the most expensive place in the world to do a weekly shop (just over 275 per cent of a weekly wage), based upon the local cost of grocery staples, compared with local wages.

Ethiopia and Kenya complete the top three, with 257 per cent and 215 per cent respectively going to food costs, calculated using data from Numbeo.

The cheapest country in the world for groceries is Qatar, where a food shop only makes up 2.62 per cent of a wage, followed by Macao (3.66 per cent) and Kuwait (4.38 per cent).

See the below infographic for the costs around the world: