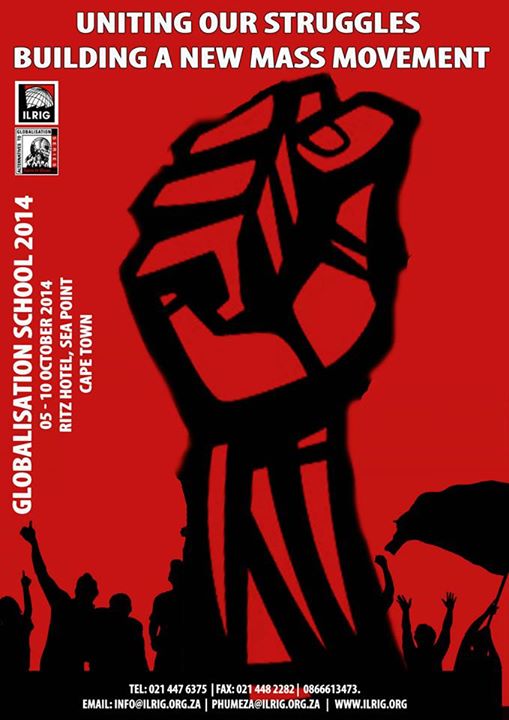 ILRIG has been hosting the School since 2001. Over that time we can discern three phases.

In the first Phase we were trying to unmask globalisation to a movement which then largely consisted of older activists who looked to the Tripartite Alliance for its politics. Within this movement ILRIG considered that it was possible to develop critical thinking within COSATU and that focusing on Globalisation was a vehicle to understand the major changes that had happened to capitalism globally since the 1980s, including the ANCâ€™s adoption of neoliberalism.

That old movement is now not only dead but its leading cadre are part of the problem, not part of the solution.

Then there was a second phase of the ILRIG Globalisation Schools â€“ roughly from the 2005 School â€“ where we attempted to work with a new layer of activists, whilst keeping one eye on the possibilities of revival amongst the older trade union activists. Amongst these activists there was still the task of helping all of us to understand neoliberalism in all its manifestations and even (by 2007) that an Alternative to neoliberal capitalism was possible and necessary.

And then came Marikana.

Now it is clear that we have a new movement â€“ completely outside of, and in opposition to, the Alliance. Activists today do not need to be convinced that capitalism is bad, that neo-liberalism is the worse kind of capitalism, and that the ANC is the party of the rich â€“ with its allies along for the ride. They know this already.

But this new movement has activists grappling with many new questions: how to we unite? How do we sink deeper roots into our communities and workplaces? What role is there for politics?  How do we build womenâ€™s leadership?

Now the School speaks to a new movement and we have to learn about all our different initiatives even while we are trying to add something from our knowledge of other struggles.

AIMS OF THE SCHOOL

Â·         To look at the new waves of struggle in South Africa and elsewhere and to reflect on the political implications of the new conjuncture.

Â·         To reflect on our challenges as a movement: specifically, about developing unity, promoting democracy and a political identity.

Â·         To share experiences with activists from different countries.

THE STRUCTURE OF THE SCHOOL

The school consists of open plenary sessions and cultural events and closed 3-day classes. Come and debate inputs by various speakers and guests and select a course which is of most interest to your organisation. Participants will participate in classes on the following topics: