JANAM on Tour in South Africa! 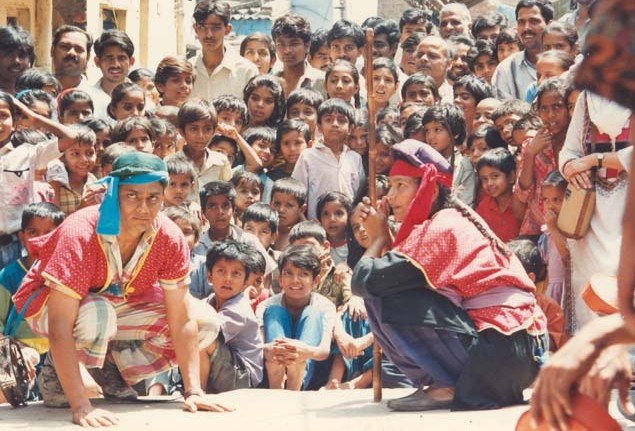 Best known for its street theatre, the group has about 8,000 performances of about 100 plays in over 175 towns and villages of India to its credit. All of its street plays, and most of its other plays, are original works. In most years, Janam does about 200 performances.

Many of Janamâ€™s signature street plays â€” Machine, Aurat Heart Desires More, O Guru) and others â€” have been performed all over India by dozens (Woman), Voh Bol Uthi (And She Spoke Up), Yeh Dil Mange More, Guruji  of street theatre groups in several languages.

On January 1, 1989, Janam was attacked as it performed a play on workersâ€™ rights on the outskirts of Delhi. Janamâ€™s main creative and organizational leader, Safdar Hashmi, was killed in this attack, as was an industrial worker, Ram Bahadur. The killing led to widespread protests all over India, and today, 25 years later, Safdarâ€™s name has become a symbol of protest and progressive culture.

Janam is financially independent. The group survives â€” and thrives! â€” on funds collected directly from its audiences, as well as contributions by well-wishers and fans. As a policy, Janam does not ask for, or accept, funds or grants or sponsorships from the government, corporates, NGOs, or political parties.

In 2012, Janam moved into its own space in West Delhi, where it also runs a theatre space called Studio Safdar as a resource for theatre groups â€” especially new groups â€” in New Delhi.

All Janam actors are amateurs, in the sense that nobody is paid by the group. Everybody has a day job, or is a student, or unemployed. But the seriousness with which the group approaches its work is anything but amateur!

Janam brings two of its most popular recent plays to RSA. Yeh Hum Kyun Sahein (Enough is Enough) is a play about the condition of industrial workers and the ploys used by capitalists. Yeh Bhi Hinsa Hai (The Faces of Violence) is about the many forms of violence against women.