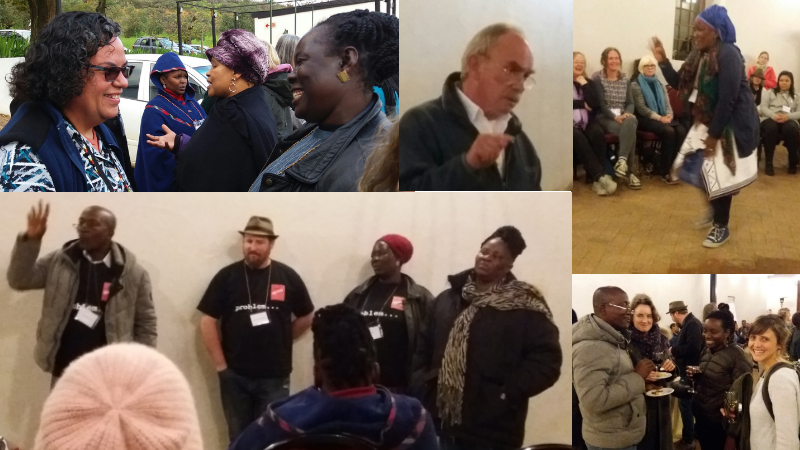 This feature offers some audio recordings from people attending the Popular Education Network (PEN) conference in 2018 (see report on full event here). These sound bites share the ideas and quandries faced by people as they grapple with engaging power in popular education around the world in 2018.

In the first section below, Ian Martin raises two key questions, that reflect on the PEN and popular education today. It also exhibits responses to questions from PEN participants. The ensuing sound bites surface some important issues to which popular educators must respond in todayâ€™s world.

Collectively these audio clips raise some of the concerns that people at PEN are holding in their work as popular educators in the current moment.

Ian Martin, self identified as the â€˜elder parent of PENâ€™, introduces the network and sounds a call for reflection:

He then launches into two questions for PEN to reflect upon;

â€¢  What has changed in the world since 1997, when the network started.

â€¢  What about indigenous knowledge and different ways of learning?

Responses to these questions: sketching the context, task and challenges to popular education today

These sound bites exhibit a number of responses to these two questions after the small group discussions.

â€¢  A participant reads out an extract from a colonial document from 1853 (the authenticity of this has been refuted but the sentiments expressed resonate).

â€¢  Challenges we are left with in Southern Africa today as we battle the remnants of colonialism.

â€¢  How can popular education internally reflect on its position in relation to indigenous knowledge and decolonisation?

â€¢  Worker precarity privatisation and the impact on young people.

Despite the packed programme I managed to get three audio recordings with popular educators present at PEN.

Lindelwa Nxu, a popular educator and community worker from Port Elizabeth, Eastern Cape, South Africa, talks to us about her five principles of popular education.

Mary Akutey, Erica Ofoe, Kofi Larweh and Jon Langon talk to us about the use of community radio in the context of the struggle around the Songor Lagoon in Ghana. As west Africaâ€™s largest salt yielding lagoon, the Songor is a central part of economic, historical and cultural life for the Ada people living around it. In the last 50 years there have been a number of struggles over this water body and its use. Resisting attempts to monopolise the salt harvesting, local communities, led by a collective of women, engage various tools for sharing information and inspiring action. Songs, stories and community radio are central to this. One of their mantras is â€œwhat one doesnâ€™t know, another knowsâ€.

Thank you to all the people who generously gave their voice and permission to make this feature possible.