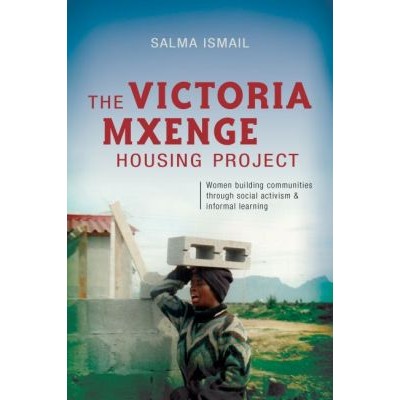 At the beginning of South Africaâ€™s democratic change, in 1994, the Victoria Mxenge Housing Project was founded by a group of 30 women who lived in shacks on the barren outskirts of Cape Town. These women had come from rural areas and were poor, vulnerable and semi-literate. Yet they learned how to build, negotiate with the government and NGOs, architects and building experts, and form alliances with homeless social movements locally and internationally, in India and Brazil. The desolate piece of land they occupied is now a thriving, sustainable community of more than 5 000 houses.

Over a period of 10 years the author tracked the history of the Victoria Mxenge Housing Association, from its start as a development organisation to its evolution into a social movement and then as a service provider. The text weaves together perspectives on the usefulness as well as limitations of â€˜popular educationâ€™, or informal learning. It highlights the value of local and traditional knowledge, experiential learning, and learning in an informal context, and illustrates how women relate to and interact with knowledge. It taps into the growing international interest in social, or â€˜citizenâ€™ learning in the context of the growth of social movements. This book is a welcome addition to the literature for adult education students and social activists throughout the developing world.

Chapter 1: Setting the contexts Land and informal settlements  â€“ Origins of the movement â€“ The state and the broader context

Chapter 2: Popular education and development This chapter situates the research within a development framework and argues that the various responses to development by the state must involve adult education.

Chapter 6: Reflections on learning in a social movement

Recommended for: Academics and students in the disciplines of adult education, gender studies, development and social movements; NGOs involved in housing; social activists and development practitioners.

About the author: Dr Salma Ismail's interest and personal experience in Adult Education started in the 1980's and ranged from teaching literacy in church communities to more activist approaches in worker and political movements. In the early 1990's she combined an activist approach with adult education first at UWC and then later at UCT. Salma is now a Senior Lecturer at the School for Education at the University of Cape Town, South Africa. She convenes and teaches on the Adult Education programmes at undergraduate and postgraduate level.

See Daily Maverick's 'Sisters are Building it for Themselves: How the Victoria Mxenge women changed the housing game' for more info: http://www.dailymaverick.co.za/article/2015-01-14-sisters-are-building-i...