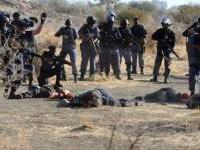 In August 2012, a group of Rock Drill Operators, dissatisfied with their wages, and with the representation available from either of the labour unions with a presence at the Lonmin Marikana Shaft, embarked upon an unprotected strike to push Lonmin for higher wages. The strike, and its attendant protest, soon gained widespread support, and incited a violent response â€“ both from union officials and the police. In the days before 16 August 2012, the striking miners, union officials, Lonmin security guards, and the police themselves, all took a small number of casualties. The striking miners â€“ about 3,000 of them â€“ retreated to the top of a small rocky outcrop just outside the Lonmin shaft compound. There they stayed for four days, demanding that Lonmin management come and address them on their demands.

Lonmin did not come. Instead, the police moved to what they called the â€œtactical phaseâ€ of their operations. They encircled the outcrop with barbed wire, and made to disperse the crowd and arrest the striking miners. As they did so, a group of the miners started to descend the hill, moving toward the Nkaneng informal settlement a few hundred metres away. Travelling slowly at first, they sped up, and raised blankets over their heads, as they were met with teargas and rubber bullets fired to their left flank and to the rear. What happened then was televised the world over. Driven towards the police line, the miners ran around a kraal in order to disperse into Nkaneng through a small gap in the police line. As they approached, the police opened fire. Seventeen of the miners were killed there. Other miners ran away, and sheltered behind a small collection of boulders a couple of hundred metres away. The police gave chase and fired into, and from the top of, the boulders. Another seventeen miners were killed.

Soon after the massacre President Jacob Zuma announced that he was setting up a Commission of Inquiry to investigate the killings on 16 August 2012, and during the ten days immediately before. The Commission, under the Chairmanship of retired Judge Ian Farlam, sat for 300 days, and received thousands of pages of documentary evidence. On 25 June 2015, President Zuma released the Commissionâ€™s report. Other than exonerating the Deputy President, Cyril Ramaphosa, and a few other key political leaders, the report did not make any findings regarding individual or collective responsibility for the deaths it was set up to investigate.

Find out more about the experiences of the families and the Commission of Inquiry here:http://www.marikana-conference.com/