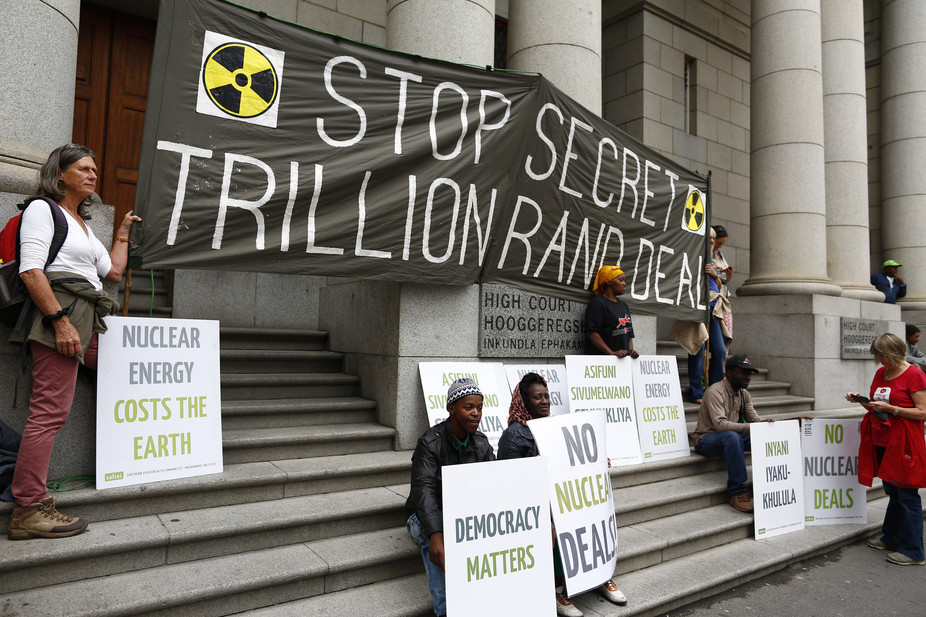 Outside a courthouse in Cape Town in South Africa demonstrators performed a short skit to draw attention to the dangers of a â€œsecret nuclear dealâ€ that could cost the country more than a trillion rand and indebt citizens for many decades to come, while no doubt enriching a handful of well-connected elites.

The performers acted out well-known corruption scenarios, and then invited discussion among the protesting spectators.

A week later, the same performance, this time in a community hall, formed part of a popular education workshop where experts interacted with citizens, focusing on the pros and cons of nuclear, solar and wind energy. 75 people, young and old, participated enthusiastically. Most had never learnt about different sources of energy â€“ despite the fact that energy prices and environmental concerns are very much their business.

The workshop was organised by the Popular Education Programme and the South African Faith Community Environmental Institute. Both are part of a coalition of organisations united under the #StopCurruptNuclearSA banner. Itâ€™s trying to stop the deal from being pushed through without proper citizen engagement and participation.

The initiative recognises the opportunity that the nuclear deal gives to engage large number of citizens in education, experimentation and debate about various energy scenarios. It aims, literally, to put power in the hands of the people.

It also shines an important light on the relationship between lifelong learning and its essential role in achieving the United Nationâ€™s Sustainable Development Goals (SDGs). The link is this: the SDGs are unlikely to be met without the active participation of ordinary people. But for that to happen, communities need to learn a range of new skills, understandings and attitudes. That can only happen if theyâ€™re in a constant cycle of learning â€“ whatever their age.

The UN has adopted 17 SDGs, each with specific targets to be achieved by 2030. The goal is â€œto end poverty, and ensure prosperity for all as part of a new sustainable development agendaâ€.

The SDGs are contested. Some critics argue that sustainability canâ€™t be achieved without tackling capitalist growth â€“ the fundamental cause of poverty and ecological crisis.

Whatever way you look at it energy issues are at the heart of the sustainable development question. This is reflected in SDG 7, which aims to ensure access to â€œaffordable, reliable, sustainable and modern energy for allâ€. The UN website states that

Energy is central to nearly every major challenge and opportunity the world faces today. Be it for jobs, security, climate change, food production or increasing incomes, access to energy for all is essential.

These issues affect all citizens. And it is low-income communities and communities on the periphery that tend to be the most seriously affected by polluting and costly energy systems. They are, of course, the vast majority.

The fact is that citizens canâ€™t depend on governments alone to make the right decisions. The way that the South African government, along with other vested interests, is pushing for nuclear energy is a perfect example.

Of course SDGs need to be engaged at the level of the UN agencies and governments. But itâ€™s essential that they are also engaged on the ground â€“ by social movements and organisations of women, men, girls and boys across social class, age and geography. Itâ€™s here that new knowledge is often created through participating actively in the struggles for social and environmental justice.

As University of Pretoria professor Lorenzo Fioramonti argues in his book Wellbeing Economy, â€œparticipatory governance is key to achieving sustainability and well beingâ€.

For this to work the majority of people need to be educated about energy options so that they can participate in decisions that affect their lives. But to be able to do this they need to be fully informed and engaged in the issues at hand, regardless of age or formal educational background.

This is consistent with SDG 4, which stresses the need to:

Ensure inclusive and equitable quality education and promote lifelong learning opportunities for all.

The UNâ€™s commitment to lifelong learning certainly sounds hopeful, but the responses of governments and funders to similar commitments made in the UNâ€™s Millennium Development Goals were underwhelming. For the most part, lifelong learning has been understood in a very limited way. The focus has been on young people and anyone not at school, college or university is often discounted, unless they pay for it themselves.

This means that the majority of citizens are left out. What this adds up to is that socio-economic relations will remain the same and the SDGs are unlikely to be met.

Instead, we need adult and popular education to be accepted as integral to lifelong learning and essential to the empowerment of local communities.

This can be achieved if more pressure is brought to bear on governments and funders to support, for example, mass popular education programmes in which experts and grassroots people of all ages engage actively on issues that matter.