Why South Africa is primed for fundamental political realignment 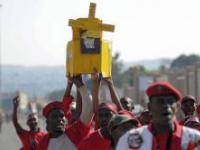 Why South Africa is primed for fundamental political realignment

As popular protests soar amid unmet expectations in South Africa, the historic partnership between the countryâ€™s powerful labour movement and the governing ANC has begun to fall apart.

South Africa has been governed since 1994 by an ANC-led tripartite alliance that includes the South African Communist Party (SACP) and labour federation Congress of SA Trade Unions (Cosatu).

But, today, a new national political elite grapples with a powerful and often intransigent labour movement over the lack of delivery on key socio-economic issues.

The workers walk away

The Marikana massacre of 2012 triggered a wave of strikes across South Africa. They culminated in an unprecedented uprising  in the rural areas of the Western Cape. It also began a process of political realignment.

The dramatic entry of the Economic Freedom Fighters into parliament in 2014 was to become the most spectacular.

But could the historic decision of the National Union of Metalworkers of South Africa (Numsa), the largest trade union in the country, to withdraw its support for the ANC, and its decision to form a United Front and Movement for Socialism, be of more long-term significance?

The â€œNumsa momentâ€, one support group boldly proclaimed, â€œconstitutes the beginning of the end for the ANC and its ambivalence towards neo-liberalismâ€.

The expulsion of Numsa from Cosatu in 2014, followed by that of Zwelinzima Vavi, the long-standing general-secretary, in 2015 did not initially slow down enthusiasm for the Numsa moment. After all, Numsa was a leading social force in the struggle for liberation. Vavi had widespread support among workers.

Are Marikana and the Numsa moment a turning point in South Africa, the beginning of the â€œnext liberation struggle?â€ Or does it mark the disintegration of a once powerful labour movement?

In response to the re-emergence of the idea of a workersâ€™ party inside Numsa, I participated in a nation-wide survey with my colleague Mark Orkin in 2014. Surprisingly, a third of South African adults definitely thought that:

a new political party, a workersâ€™ or labour party, will assist with current problems facing SA.

What could the social base of such a party be? In a nationwide adult sample, 30% of the full-time or part-time employed would definitely support a workersâ€™ party, rising to 40% of the unemployed.

The highest expression of â€œdefiniteâ€ support for the idea of a workersâ€™ party was among the black working poor. Their household incomes were less than R8,000 (about US$600) a month and they have primary or secondary school education. They were in the main working age of 18-49.

By contrast, the lowest expressed â€œdefiniteâ€ support for a workersâ€™ party was among whites, Indians and coloureds alike. Their household incomes were more than R8,000 a month; they tend to have a tertiary education and are among the oldest of those surveyed.

Numsa has approached the question of a workersâ€™ party with caution. Following independence, trade unions in post-colonial Africa have tended initially to submit to the ruling party that drove the liberation struggle.

Growing marginalisation led unions in countries such as Zambia and Zimbabwe into opposition and the formation of a separate political party. In the case of Zambiaâ€™s Movement for Multiparty Democracy the party won state power in elections.

But, there has generally been a low level of tolerance of political opposition in post-colonial Africa. The result is a culture of â€œusâ€ versus â€œthemâ€. Union-backed opposition parties have often been quickly labelled â€œcounter-revolutionaryâ€ and â€œimperialistâ€.

The union-backed Movement for Democratic Change soon became the focus of organised violence inflicted by the Zimbabwean state.

A workersâ€™ party is more likely to survive in South Africa. This is thanks to a relatively large industrial working class, strong civil society organisations and an independent trade union movement with a political culture of shop-floor democracy.

But what would the form and content of a working-class politics be in South Africa? Is it to involve a broad workersâ€™ party, along the lines of Brazilâ€™s Partido dos Trabalhadores, with links to working-class communities, academics and small farmers?

Or is it to be a more traditional labour party along the lines of the UK Labour Party, with close ties with organised labour? Is it to be a revitalised Marxist-Leninist vanguard party, a mirror image of the South African Communist Party? Or could it be the United Front?

A national working committee of the United Front was established in December 2014. It is designed to link unions to struggles in the community. It has a large number of loose social justice and environmental justice affiliates, so it is yet to be formally launched nationally.

But, its political direction remains uncertain: should it be openly socialist, or a broad front similar to the United Democratic Front  of the 1980s?

Is it a step towards a workersâ€™ party or is it an autonomous body connecting a range of community-based organisations? Should it engage in electoral politics or should it remain at armâ€™s length from party politics?

Importantly, the local-level militancy that emerged over the past decade is fragmented. It is different from the social movement unionism of the early to mid-eighties. The link between the current township protestsand Numsa is tenuous.

Labourâ€™s dilemma in post-colonial countries is how to express its distinct interests in a way that it does not have a confrontation with the state. It also does not want to alienate itself from those who continue to support the dominant national democratic tradition.

Interestingly, the Ghana Trade Union Congress has chosen the path of non-alignment with any specific political party. It prefers to develop its own political demands, lobby for them and advise its members to vote for the party that supports its programme.

A similar approach has been adopted among some informal worker organisations in India. Informal worker movements, US based sociologist Rina Agarwala demonstrates, are most successful when operating within electoral contexts where parties compete for mass votes from the poor.

She calls this competitive populism. These informal worker organisations are not attached to a particular party nor do they espouse a specific political or economic ideology.

We are entering a new kind of politics, what some have come to call the â€œpolitics of precarity." There is, as sociologist Jennifer Chun argues:

growing interest in a new political subject of labour â€¦ women, immigrants, people of colour, low-paid service workers, precarious workers â€¦ Groups that have been historically excluded from the moral and material boundaries of union membership.

Whether the left activists of the labour movement have the political imagination and energy to take advantage of this new terrain remains to be seen. What is clear is that the old labour order is no longer sustainable and building an alternative is going to require long-term organisational work.

Looking back, 30 years after the death of trade unionist Neil Aggett, who was the only white person to die in detention in apartheid South Africa, I believe we can learn from his work and life: to encourage the different political traditions to openly compete in parliamentary and extra-parliamentary forums.

What he wrote in those painful final days of his life, while being tortured, should guide us in the present:

What the workers and the people need are open democratic organisations in which they can participate.

This article is based on the Second Annual Neil Aggett Labour Studies Lecture: The Death of Neil Aggett: Unions and Politics, Then and Now delivered by the author on September 21 2015 at at Rhodes University, South Africa.Socialism